WHY DO THIS TEST:

Titleist Drivers have always been widely recognized as a forgiving, good looking, solid feeling, overall high performing driver by many. The 915 model made huge gains in both ball speed and spin reduction over its 913 predecessor. Two years after the 915 launch comes the highly anticipated 917… but what changed? What was improved, and how will this driver help me shoot lower scores compared my current 915 gamer? If you are a Titleist loyalist looking for information or a die hard golfer looking for the answer to your driver woes, read below to learn everything you need to know about the new Titleist 917 D2 & D3 Driver and how it truly is the standard for complete performance.

Same shaft, same Surefit CG weight denomination and location (917 only), same Surefit hosel setting. The goal in this test is to compare the 917 heads against the 915 heads straight up to determine any difference in spin, launch, ball speed, and of course distance.

Below is a screen shot from my iPad just to validate the numbers above.

I have conducted well over 50 917 driver fittings since mid September, most with golfers who are looking to upgrade their 915 driver. I am not surprised that the performance gains seen in those fittings are quite similar to what we saw in this test. The biggest thing that jumps off the page, and the thing that will help nearly all golfers, is the spin reduction capabilities that 917 has over 915. The 917 D2 on average spun about 400 RPM less than the 915 D2. Along the same lines, the 917 D3 spun about 350 RPM less than the 915 D3. Another data point that really jumps out is the increase in ball speed the 917 gained. 917 D2 was 1.6 mph faster than 915 D2, and 917 D3 was 1.0 mph faster than 915 D3. These numbers contributed to great distance gains for the 917 models. The 917 D2 was 9.3 yds longer in total distance and the 917 D3 was 7.1 yds longer. These performance gains can be attributed to an upgraded Active Recoil Channel which reduces spin and increases speed, and an upgraded Radial Speed Face which gives the golfer more speed and distance across the face, specifically on miss-hits. The last thing to note is the launch angle. Both 917 models launched about 1* lower than its 915 counterpart. We all know that high launch and low spin is the recipe for maximum distance, and my recommendation would be to get properly fit for your new 917 driver. Don’t simply buy the 917 9.5 if you played the 915 9.5. You might launch the ball too low and might not maximize your carry/ total distance. The Titleist 917 Driver… more distance, more often.

Same shaft, Surefit hosel setting, head model, and loft. The goal of this test is to identify the differences in ball flight properties between varying Surefit CG weight settings (draw vs. fade) and varying weight denominations (16g vs 8g). The Surefit CG weight system allows the golfer to further dial-in their Driver to achieve maximum performance, more so than any Titleist Driver in the past.

Below is a screen shot from my iPad just to validate the numbers above.

With the Surefit CG weight technology being relatively new (only seen in the limited C16 line) and virtually untested, this test proved to be informative and eye-opening. First lets look at the 12g Draw vs. Fade settings. The Fade setting was about 100 RPM less, and launched about 1* higher than the Draw setting. These gains led to about 4 more yards. The reason for this is due to the CG weight port not being parallel with the club face. When the weight is in the fade setting (toe of the club), the CG of the clubhead is pushed towards the face, which will lower the spin rate and produce a longer fade. Conversely, when in the draw position (heel of the club) the CG moves further back from the face, increasing spin and making the club more stable (higher MOI). Now lets look at horizontal dispersion between the draw and fade settings. In the draw setting, my average shot was 29 yards left of target where the fade setting was on average 8 yards left of target. I am a draw player and my big miss is way left, and this test proves that in the fade setting the dynamic closure of the clubhead is slowed down, and will assist in eliminating the left side of the golf course.

Now lets look at the test between the heaviest neutral setting (16g) vs. the lightest neutral setting (8g). First off let me say that the 4 Swingweight difference was noticeable right away, and the 16g setting produced shots with on average 300 less rpm of spin, .7* lower launch, 1.4 mph faster ball speed, and about 7 more yards of total distance compared to the 8g setting. Surprisingly, the club head speed INCREASED with the heavier head by about .5 mph. The feel through the ball with the 16g setting felt “heavier” and more solid, leading to great performance gains. My recommendation would be to try a heavier weight and lighter weight during your fitting and see what happens to clubhead speed, distance, and of course dispersion. For me, the 16g weight was actually on average closer to my target line compared to the lighter 8g weight. I currently play the 12g fade setting in my 917 driver but after seeing these results I will be testing heavier weights throughout the winter months.

Here is a list of additional benefits of the Surefit CG according to Titleist.com:

Below are pictures of the 917 Driver and FW weight kits. The Driver weights are longer and thinner and thus will not fit into the 917 FW, and vice versa. Also, for Swingweight purposes, the nominal (standard, what all clubs will come with off the rack) weight for the Driver is 12g, and 14g for the FW. These weights are both RED in color. Furthermore, the weight range for the FW weights is from 10g-18g and the Driver weight range is 8g-16g. When a consumer purchases a 917 metal whether it is off the rack or a special order, they will receive both the neutral and draw/fade weight. Individual weight pairs are available for purchase as well as the entire weight kit.

If you have ever hit balls on the range next to a big hitter gaming a 915 driver, your ears most likely took a beating. The high pitch/ frequency and sometimes resonating acoustics of the 915 has been greatly improved in the 917. The Tour validated sound and acoustics on the 917 have been tuned down, producing a more solid feel through impact, which yields a dampened sound that is easier on the ears but still inspires confidence. The new “liquid slate” crown color is reminiscent of the old Titleist 975 D/J drivers and is quite appealing to the eye and I have found it to produce slightly less glare when playing on a sunny day. Although different, it is a refreshing change of pace.

WHICH CLUB HEAD/ SUREFIT CG WEIGHT SETTING SHOULD YOU GO WITH:

You are an accurate driver of the golf ball and would gain distance from spin reduction
You are looking for more workability
You prefer the look of a small, classic pear shape head coming in at 440 cc
Your miss is left and would benefit from a club that doesn’t release as much as the D2

Again, please don’t just pick the obvious choice here and try both a heavier and lighter weight option. Note swing speed, overall distance, but most importantly left-to-right dispersion. A general rule of thumb I have noticed is play the heaviest weight that

The 915 was a great driver with its improved spin numbers and faster ball speeds, but it is obvious that Titleist really hit a home run designing the new 917 model. Players of all swing speeds and types are seeing great performance gains that are tough to achieve nowadays with the USGA limits on clubheads. The 917 Driver spins less, increases ball speed, looks sharper, and feels much better. Pair that with a increased adjustability with the Surefit CG weight, the best and most stock shaft options to date, and a more user friendly headcover, and the 917 is born. As always, remember to get properly fit for you new 917 Driver, which truly is the Standard for Complete Performance. 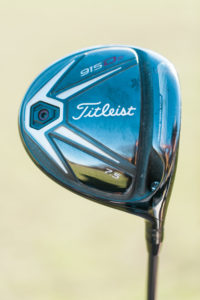 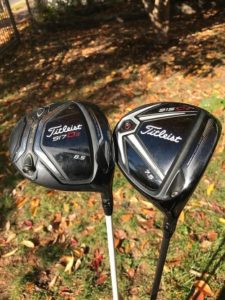 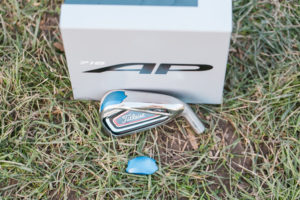